Whether a band or DJ (or both) is the best fit for your event will depend on a number of factors. In this article we go through the pros and cons of each.

But first, some history.

Musicians & DJs: A History Of Conflict

Once upon a time, musicians and DJs got along just fine.

We lie: this never happened.

Imagine it’s the year 1900. You are the proud and successful manufacturer of horse-drawn carriages. Along comes a young upstart called Henry Ford, and in a couple of decades you’re ruined. This is kind of what happened to musicians.

Many of us are still a little upset about this:

Others are resigned to it. Yet others have used it to their advantage. For a while there it seemed every band had a token DJ. Remember Incubus? This is not a trend we really miss to be honest. These days there are many acts who combine acoustic and electronic elements in sophisticated and interesting ways, and the line between acoustic and synthesised or sampled music is increasingly blurred.

Nevertheless, the enmity between some musicians and DJs persists.

Partly this is due to musicians’ inflated sense of self-importance. Many of us see ourselves as something like this:

The grudge against DJs (or more specifically DJ/producers) is somewhat justified. Many great musicians of the past, often paid a pittance for their work or not credited at all, made timeless recordings that went on to be sampled by producers and DJs who usually didn’t credit them. Funky Drummer, played by the late, great Clyde Stubblefield (James Brown), is the most sampled recording of all time – used in 1722 songs according to whosampled.com. Stubblefield earn no royalties from this recording. He didn’t even get a songwriting credit.

While it’s probably unfair to single out one DJ/producer, Dr Dre (producer for Eminem among others) has made a lucrative career out of other people’s music. Recognise this?

The Labi Siffre example is a particularly egregious one. A proud gay man, Siffre agreed to allow Dre to use this sample on the proviso that Eminem removed homophobic lyrics from the song. Siffre didn’t think to stipulate that the slurs be removed from all versions of the track though. The more widely distributed explicit version was the one with the original lyrics; only the clean version had the slurs removed. The record industry can be a ruthless business sometimes.

Suffice to say this kind of chicanery riles up many musicians. Which isn’t to say that musicians themselves haven’t been guilty of the same thing. Examples include Coldplay, Men At Work, Lana Del Rey, and Ed Sheeran (multiple times). In their defence, many of these claims of copyright infringement are less substantial, hinging upon similarities between the songs rather than outright sampling.

Though musicians and singers often cut corners too. Or if you’re Justin Bieber, on every tour:

Okay, enough poking fun at artists who are more talented than us. Let’s lay out some facts.

1. It takes as much skill to get to a high level as a DJ as it does as a musician. To master any artform takes a lifetime.

2. You won’t usually see virtuoso performances at weddings and corporate events. Why? Because the job is not to be Wolfgang Amadeus Mozart or this guy, but to entertain people.

4. It may be easier to fake it as a DJ, but that doesn’t mean musicians never fake it. Many wedding bands or duos that use backing tracks are little more than glorified karaoke.

So Should I Hire a Band or a DJ?

Consider the following factors before making your decision.

BUDGET
Bands are nearly always more expensive than DJs. Why? Same reason hiring four plumbers to fix your toilet is going to be more expensive than hiring one. On the other hand, music is one of the handful of things that can make or break an event, so make room for it in your budget.

SPACE
Bands usually take up more room than a DJ. If your event is being held in a small, packed venue (this is not a bad thing), you may not have room for a band. That said, you can fit a band in a pretty tight space, even if it means they may have to leave extra speakers, lighting, drums, and other non-essentials at home (this might result in a discount too, as it means less work for us). We try to keep our acts’ footprints as flexible as possible for this reason. 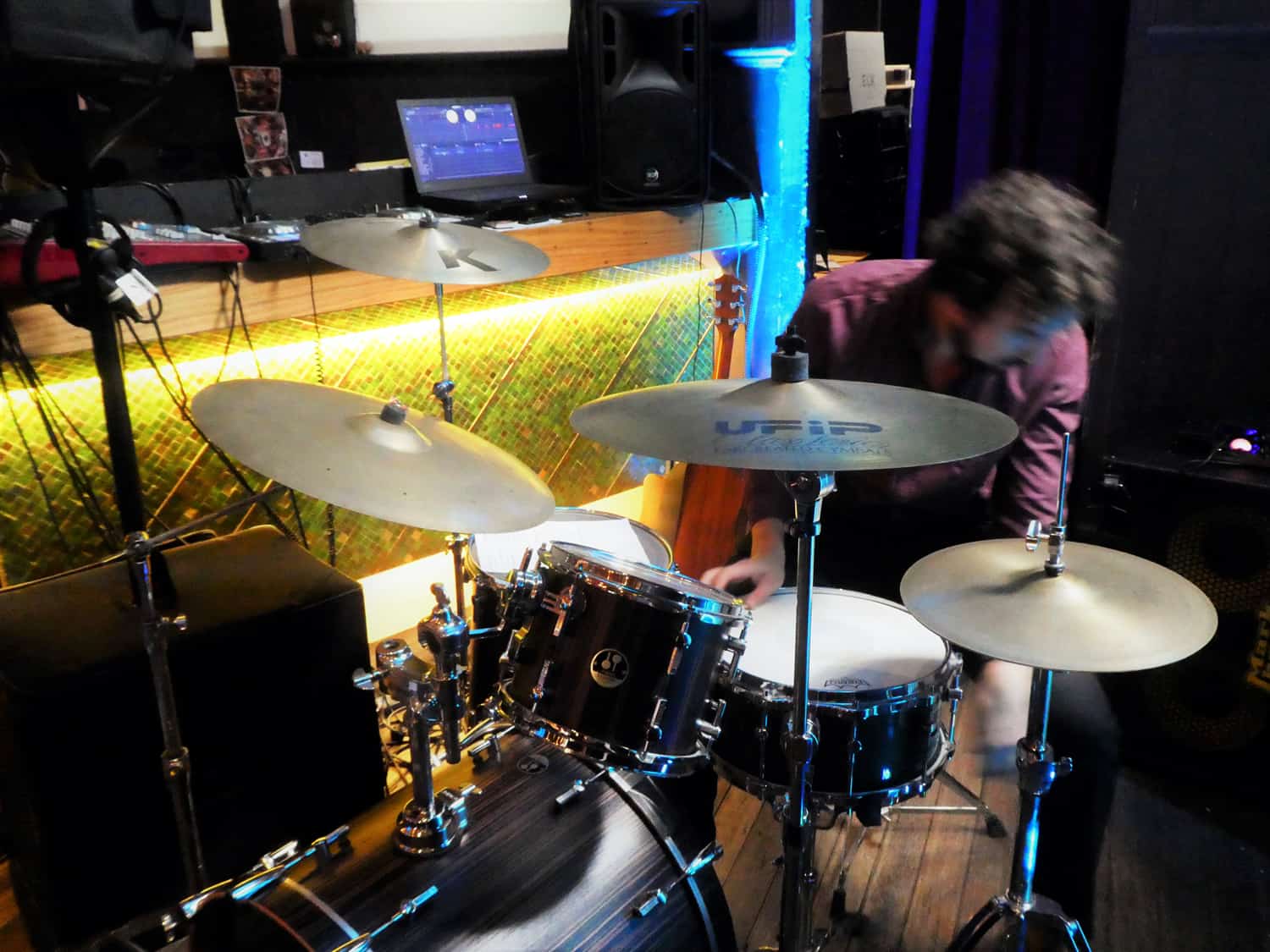 Our drummer Dan setting up in a tight space for a wedding at amazing Brunswick Mess Hall. Despite the tetris, the sound in the room was great. The venue was packed: this helps a lot.

NOISE
DJs and acoustic bands that don’t incorporate drums have more control over volume. If your venue is in Melbourne and has unfriendly neighbours they may not allow drums at all. Nothing sounds quite like a live band at full throttle. Good bands can cook at low volume as required, but depending on the acoustics of the room this might be difficult. You don’t want to spend significant money hiring a live band only to have the venue make them walk on eggshells the whole night due to oversensitive metering.

There’s been a trend in recent years towards minimalist and industrial aesthetics, which has seen spaces pop up with interiors of concrete and glass. Just the ambient noise of your guests chatting in these spaces can be unbearably loud. In a space like this a live band with drums will struggle to keep a lid on the volume no matter what they do. So if your heart is set on a band, keep it in mind when choosing your venue. Regardless of what kind of act you plan to book, we recommend you go for a venue with lots of soft surfaces like curtains, carpet, and upholstered furniture, rather than a big, cold, echoing factory. You want a pleasant space for your guests to spend 5 or 6 hours in. And the comfort factor goes beyond acoustics: walking (or dancing) around on a hard concrete floor all night is hard work.

REPERTOIRE
If you want more alternative or obscure music played at your event, you might have a hard time finding a band with a song list you’re happy with. Songs take serious time and effort to learn properly (for this reason beware bands with repertoires of hundreds of songs), and professional bands can’t afford to learn thirty or forty new songs for every event. So if you want a specialised playlist, go with a DJ. But if you only want the most popular wedding and party songs, you’ll get that from a band. Keep in mind that even if you hire a band you can still request whatever songs you like to be played in the set breaks and at other times during the event.

ENERGY
Most bands put out more energy than most DJs. It’s hard to pinpoint why exactly, but we always feel a higher level of anticipation and excitement in the room at live band shows. So if you want that extra level of energy at your event, book a band.

AESTHETIC
We know how important aesthetics are, especially for brides. Perhaps you want a neat, trim looking DJ setup tucked away at one end of the room – heard but not seen. Maybe you like the look of a live band, with all those shiny instruments and good-looking (cough) musicians. Or perhaps you don’t care all that much either way. But it’s something else to consider when deciding between a band and a DJ.

NOVELTY
DJs are ubiquitous these days; bands are special. A common thing we hear from guests at weddings and other events is “wow, live music!” If you really want to impress, a DJ simply won’t cut it. Live music is nostalgic and close to people’s hearts. There’s a lot of loyalty to it, especially in Melbourne.

MIXING IT UP
The good news is that you can have the best worlds. Our most common booking is an acoustic band (acoustic duo usually) providing background music for roughly the first half of an event, working up to a fun, upbeat, singalong vibe – followed by a party DJ to get the dancefloor pumping. If you’re booking music for a full day wedding, have the live acoustic music at your ceremony and canapes, followed by a DJ at the reception. Mixing it up is the most cost-effective way of incorporating live music into your event while still achieving that dance party atmosphere you want later in the night.

STILL UNSURE WHAT TO BOOK?
Ask your entertainment supplier what they recommend. This is what they do for a living, and it’s in their interests that your event is a success too. At the same time be wary of suppliers who automatically steer you towards their most expensive option, or are overly pushy.

1. Musicians and DJs have a lot in common, and should just try to get along.

2. You don’t need a virtuoso at your event; you want an entertainer.

4. If the music is important to you, decide what kind of act(s) you want before you decide on your venue.

5. Provide as much info to your entertainment supplier as you can, then pick their brains.